In our last trip to the US, we had a few days in San Antonio to kill. My husband and I have been there before during a roadtrip through Texas and the American West where we visited the Alamo. With me and Little Man on our own because my husband had work to do, we decided to go exploring in the city.
Museums are great, but what Little Man needs these days is a place to wander around and expend some energy. And a hotel lobby is only so good for that. I decided that wherever we travel, we’ll go explore the zoos, aquariums and children’s museums (any or all of the above). San Antonio had both the zoo and the children’s museum (and the aquarium, somewhat, if you count Seaworld).
We had three days, so it only made sense to explore all three. And boy was it fun! Most cities have a children’s museum where it is a hands on place with lots of rooms that have different activities and focus areas. Since Little Man is still only truly mobile on his hands and knees, unless he’s holding onto a wall or cart or hands, we aim straight for the toddler or soft play area. Some museums have these areas blocked off so it’s only for toddlers and babies less than 36 months, some have just an area but it’s not segregated as much.
The San Antonio Children’s Museum has a small-ish area that is walled off and you must be under 36 months and accompanied by an adult to go in. It’s not monitored, but it is the honour system there – and most of the activities aren’t really exciting for those who are a bit older. Little Man loved the different areas in the little TotSpot in this children’s museum. It has the perfect amount of activities and space for several babies/toddlers to play in and amuse themselves with. There was this jumbo Lite-Brite wall which was the perfect combination of pulling things out to pile them up and then trying to put back. It was this meter-square board with 1-inch diameter holes drilled in it spaced about 3-4 inches apart sitting in front of a light box. Then, there were lots of clear plastic dowels in several colours you could fit into the holes. And presto – a blue dowel that looked ok off the wall all of a sudden lit up when stuck into a hole! And imagine having twenty of these coloured dowels to take out (and mummy putting back in). A Little Man’s delight! There was also a great soft play area – undulating soft ramps and big mats that babies could crawl around and the more mobile ones could play on and not have any worries of banging into anything. They were situated in a corner of the room, against some cool mirrors with a ballet barre right at cruising height. Once Little Man discovered the mirrors, he was sorted. 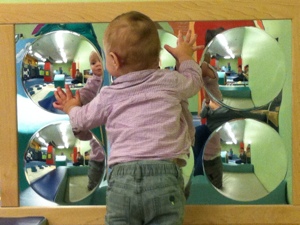 The other favourite area was a big tube filled with water and some bobbing plastic fish that had continuous bubbles floating up. At the base, the were four buttons, each a different colour that when lite, would colour the column in that colour. Well, bubbles and buttons are some of Little Man’s favourite things too, so he spent lots of time playing with that area too.
The whole museum took up two floors and it must have been situated in an old woolworth’s or something with massive windows along the front but lots of space for kids to run around and be entertained on a rainy (or, as it’s Texas, super hot) day.
Is is situated right across from the Alamo and next to the Riverwalk, so if you are in San Antonio without a car (or don’t want to drive for a while), it’s perfect.

…and lots to catch up on. Coming up, I plan to write up recaps on:
Houston – Gymboree, the zoo, the Children’s Museum and the aquarium
San Antonio – the river walk, the Children’s Museum and the zoo (and Brackenridge Park)
Miami – the Seaquarium and the beach!
Until them, I’m working on getting a very awake one year old to sleep…dealing with jet lag is probably another post in and of itself.
Here’s a pic of Little Man enjoying his first shovel and bucket!